Poland is a part of the global tourism market with constantly increasing number of visitors. Tourism in Poland contributes to the country's overall economy. The most popular cities are Krakow, Wroclaw, Gdansk, Warsaw, Poznan, Lublin . Poland consist the best recreational destinations, these are: Masurian Lake District, Baltic Sea coast, Tatra Mountains (the highest mountain range of Carpathians), Sudetes and Bialowieza Forest. Most tourist attractions in Poland are connected with natural environment, historic sites and cultural events. They draw millions of tourists every year from all around the world. Poland has a diversified natural environment, which is relatively unaffected by human development. Visitors are attracted by mountains, sea-coast, forests and the lake reserves. Poland's main tourist offers consist of sightseeing within cities and out-of-town historical monuments, business trips, qualified tourism, agrotourism, mountain hiking (trekking) and climbing among others. Poland is the 17th most visited country in the world by foreign tourists, as ranked by World Tourism Organization (UNWTO) in 2012. Poland Consists the best tourist destinations,among the most popular destinations are:

Bieszczady is a mountain range that runs from the extreme south-east of Poland through Ukraine and Slovakia. It forms the western part of the Eastern Beskids and is more generally part of the Outer Eastern Carpathians. Frequently Bieszczady refers only to the Western Bieszczady or even only to the part of the range lying within Poland. 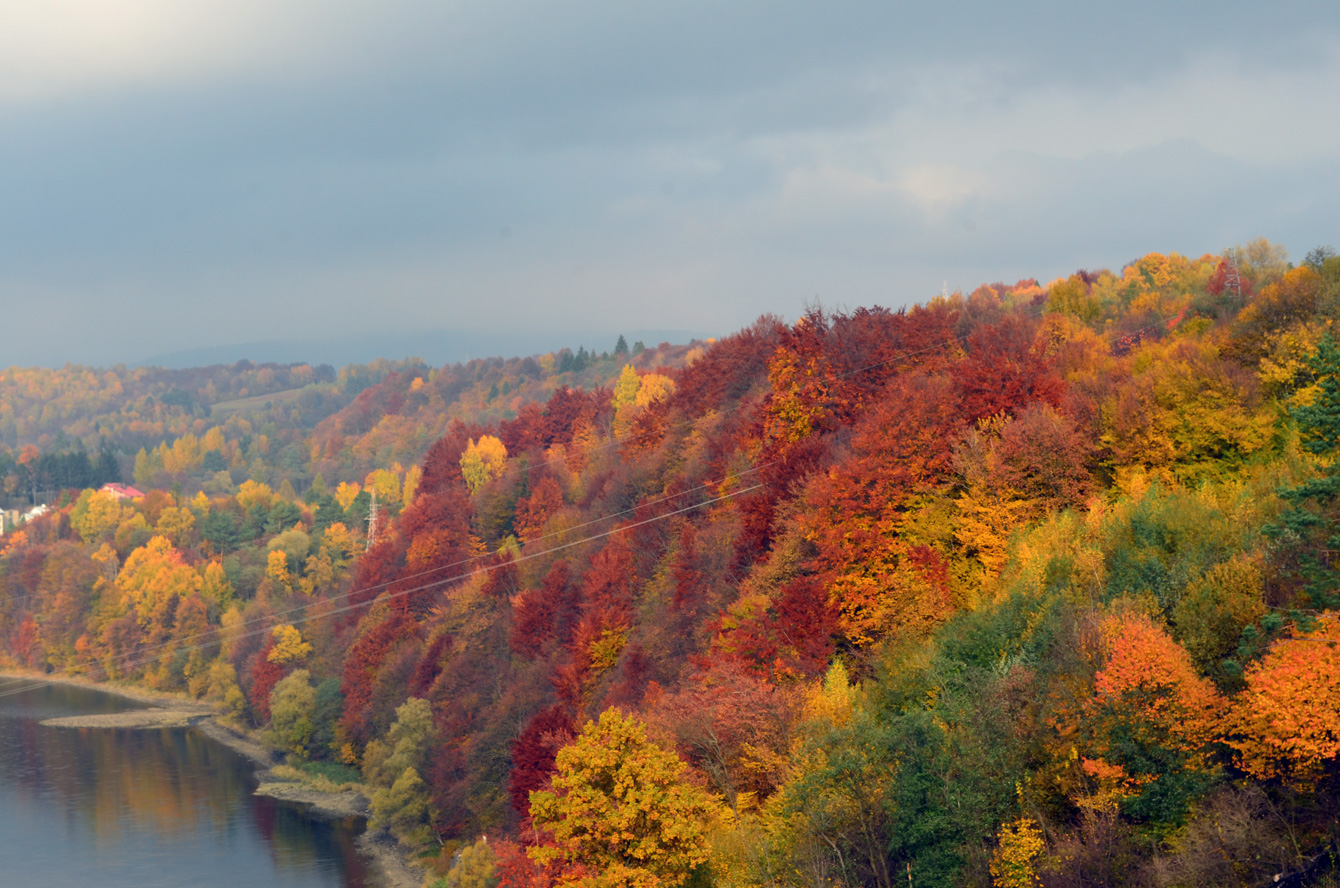 The highest peak of Bieszczady is Mt. Pikuy (1405 m) in Ukraine. The highest peak of the Polish part is Tarnica (1346 m). Bieszczady Mountains in Poland is a part of the Carpathian Mountain Range, constituting the western flange of the Eastern Beskids Mountains. They are situated at the extreme southeast part of Poland, near the borders of Slovakia and Ukraine. Its claim to tourist fame is the Bieszczady National Park, which has been declared a UNESCO biosphere reserve. Sanok, known as the "Gateway to the Bieszczady", is the most important town in the region. There are bus links with the majority of the cities in the south and east of Poland, including Krakow, Katowice, Warsaw, Gliwice, Przemysl, Krosno and Mielec. From Sanok, one can easily visit the smaller towns of either Ustrzyki Gorne or Ustrzyki Dolne - both forming popular jumping-off points for trips into the mountains. The Bieszczady is surrounded by two major road systems, known as Mala and Duza Petla Bieszczadzka. The Bieszczady Mountains is a place steeped in history, natural splendor and yet at the same time, it is a haven both for the peace loving and the adventure lovers..

The Masurian Lakeland is the most popular tourist destination of Europe's lake districts. Masurian Lakes Districts located in northeastern part of Poland, the Masurian Lake District is also often called "A land of a thousand lakes". In fact, 10,000 years ago, the glacier shaped more than three thousand of them, making this region a unique place. 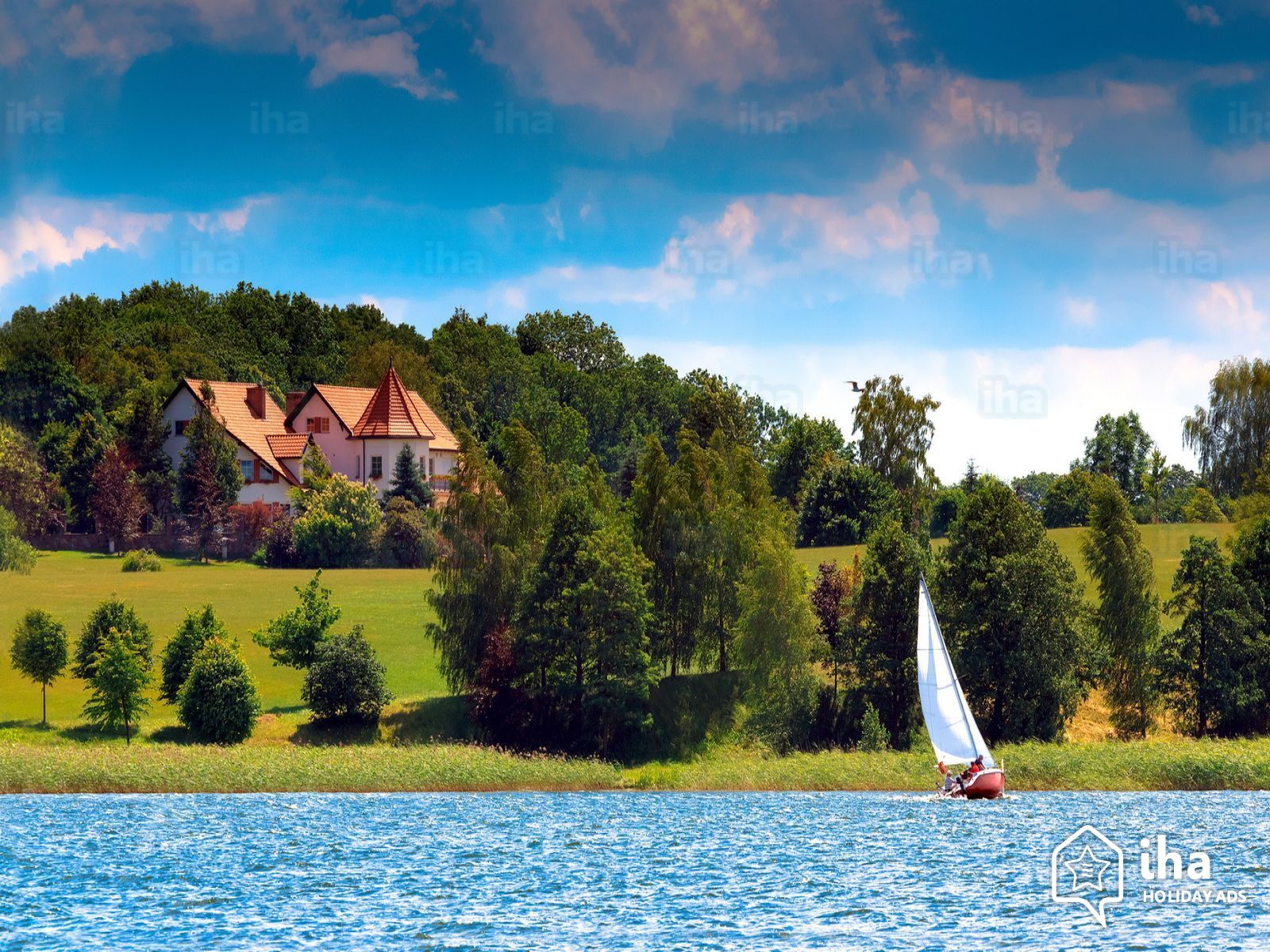 In the past, the District was a part of German province of East Prussia, inhabited by Germans, Poles and Lithuanians - a mix which allowed to develop "Masurian identity" among those living here.In the past, there is the cuisine and beautiful architecture, especially in the countryside, among clean lakes and abysmal forests. Today, the Masurian Lake District offers a broad variety of turistic activities. The main are connected with a system of lakes and channels, which make the main sailing route. It stretches from the town of Wegorzewo in the north of the region, through Gizycko and Mikolajki, to Ruciane Nida in the south. It is an excellent base for canoeing, windsurfing and of course sailing - every summer the major lakes host international boat racing events. The large primeval forests - Puszcza Piska and Puszcza Borecka, is surrounding Masurian Lake District, add to the attractiveness of the region. Biking and horse riding among forests, fields and lakes are just some of the ways to explore the Masurian land. The beauty of nature, clean and fresh air, friendly people - all of this and much more make Masurian Lake District one of the bests pots for vacation in this part of Europe. Hotels, guest houses and camp sites are plentiful in the villages that surround the lakes, and visitors often travel by bicycle or boat to tour the scenic area..

People have lived upon the site of Wawel Castle since the Paleolithic Age. The castle itself was first built in the 14th century . Wawel is a limestone hill in the centre of Krakow upon the Vistula River with a complex of impressive historical monuments of unique historical and artistic values. This extraordinary sanctuary determines the Poles' identity, is their national and cultural symbol. 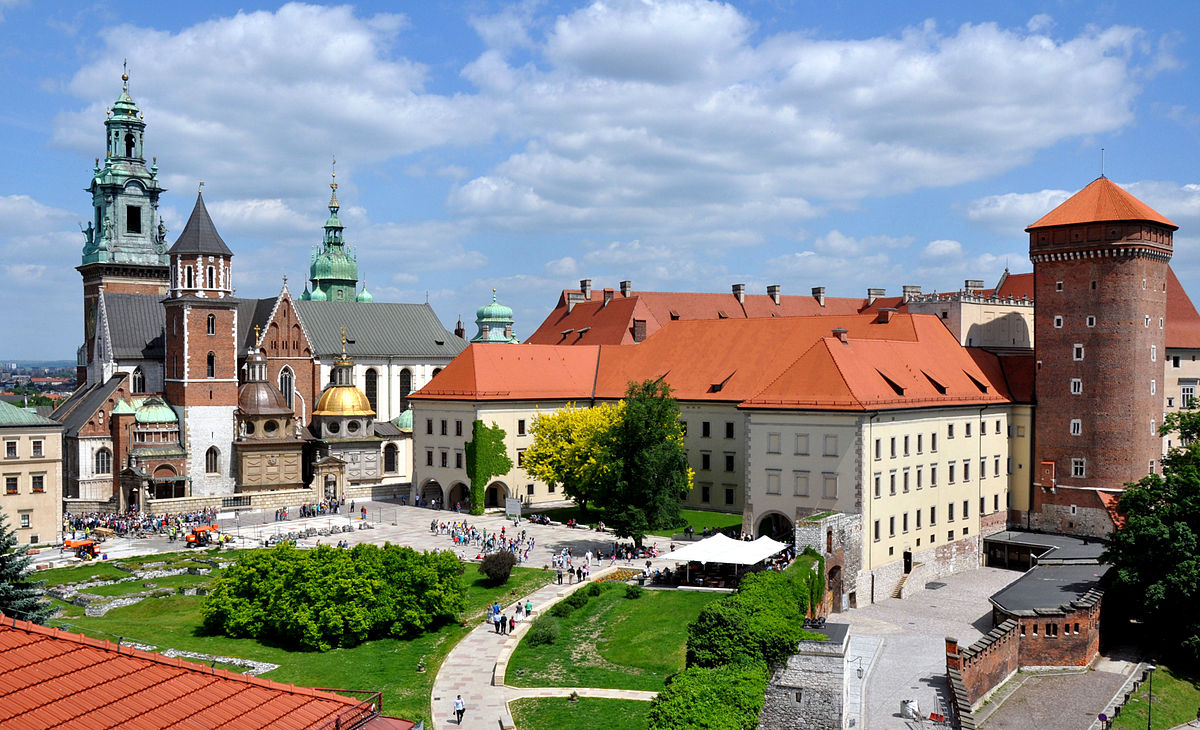 Wawel used to be the seat of Polish rulers, their necropolis and place where the Polish history took shape.Wawel Castle Situated on the bank of the Vistula river, surrounded by waters and marshes, the hill provided a safe haven for people who have settled here since the Paleolithic Age. It is supposed that the Slav people started living on Wawel hill as early as the 7th century. Early medieval legends tell stories about a dreadful dragon that lived in a cave on Wawel Hill, about his slayer Krakus, and about the latter's daughter Wanda, who drowned herself in the Vistula rather than marry a German knight. In the 9th century Wawel became one of the main Polish centres of Christianity. The first early Romanesque and Romanesque sacral buildings were raised here, including a stone cathedral that was erected after the bishopric of Cracow was established in the year 1000. People have lived on Wawel Hill at the site of the Castle as early as fifty thousand years ago, in the Paleolithic Age. The settlement was apparently bustling with trade, assorted crafts and local farming. When more people began to settle down on the Wawel Hill and when trade became more efficient, the rulers of Poland took up their residence at the Hill as well.The Wawel Castle enshrines the knowledge of polish history and at the same time is a symbol of its continuity. Wawel is the rising bend of the Vistula, houses are the most Precious group of monuments of the national history and culture in Poland.So we can say that Wawel is a place where one can best understand the Poland and the poles.

Poland' s Baltic coast is over 500 km in length is awaiting those who enjoy relaxing by the waterside. The great attraction of Baltic coasts lies above all in its beaches full of beautiful amber sand, often stretching for kilometers . The Baltic Sea is connected by artificial waterways to the White Sea via the White Sea Canal, and to the German Bight of the North Sea via the Kiel Canal. 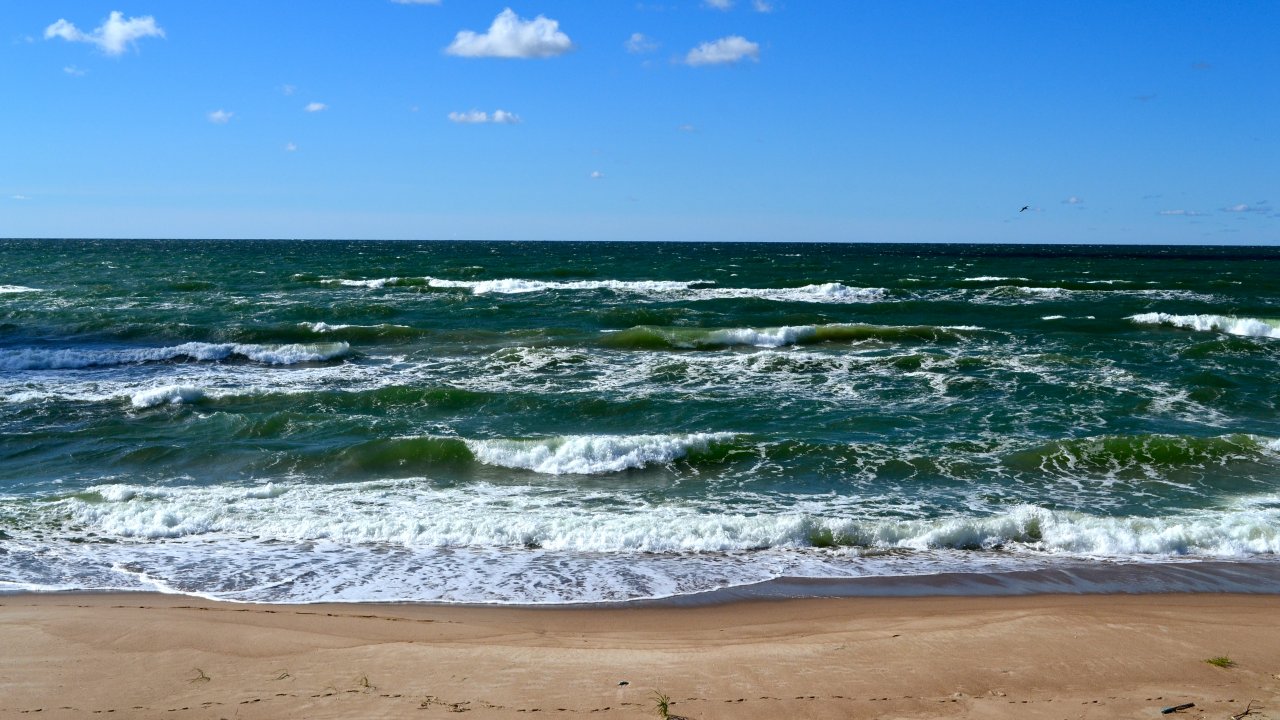 The central part, also called the Baltic Proper, is bordered on its northern edge by the Gulf of Bothnia, on its northeastern edge by the Gulf of Finland, and on its eastern edge by the Gulf of Riga. On the Baltic coast you will find many popular seaside resorts like: Gdansk, Sopot, Gdynia, Ustka, Swioujscie, teba, Mileno, Miedzyzdroje and more, located within the Coastal Landscape Park, Bialogora, Debki, Karwia, Jastrzebia Gora, and Wladyslawowo. These towns function both as river ports and cultural centre's, besides offering facilities for water sports. The beaches on the Baltic coast, set against a background of pine forest. The Baltic seaside resorts also make ideal bases for trips on horseback or by bike, tourists have been coming to the Baltic sea coast all year round.

If somebody wants to see a forest the way it was hundreds years ago, they have to visit Bialowieza Forest. A visit to Bialowieza is a journey to the past when Europe was covered with impenetrable forests. It is one of the most important natural treasures not only in Poland, but also in Europe. Therefore, in 1979 Bialowieza Forest was included in the UNESCO World Heritage List. 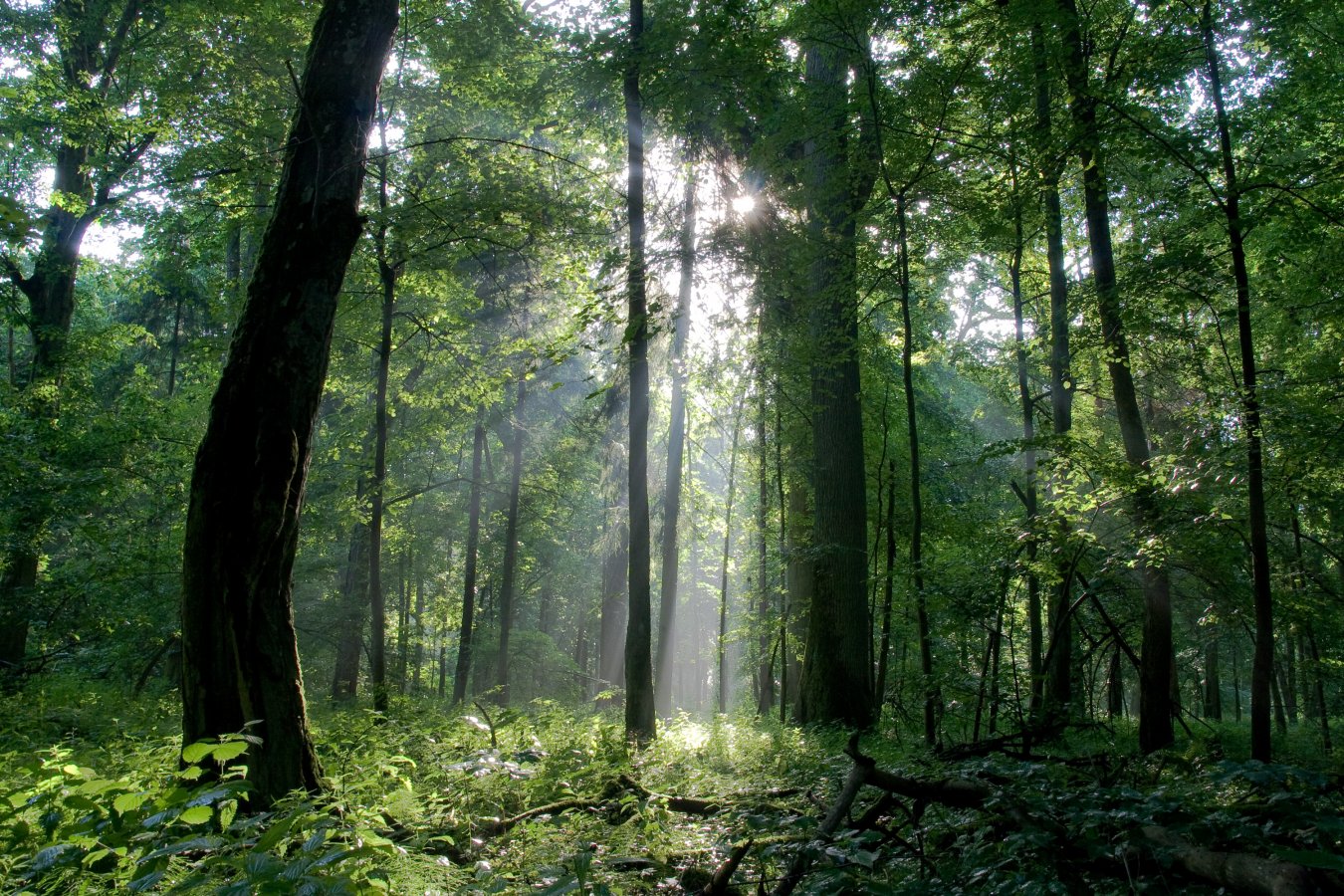 The Forest is located approx. 260 km to the east of Warsaw and approx. 70 km to the south-west of Biatystok. Its most precious parts are protected within Bialowieza National Park. The forest is inhabited by a wide variety of species, some of which grow to unusual sizes. A typical element of the forest landscape is a large number of old fallen tree trunks. The forest landscape is formed best in a separated part of the National Park, to which the access is possible only when accompanied by a licensed guide. The best time to visit Bialowieza Forest is spring. Eventhough every season is good, but in spring the nature wakes up. Hundreds of flowers, fresh greenness of trees and moderate temperature is great for hiking. In summer, the forest turns into really wild, dense and mysterious woods. This is a perfect time for long bicycle trips through the forest. Autumn provides a dream colours for photographers,